The Great Recsssion held nothing in the way of good timing, but in late 2011 Prairie Capital and Vierville Capital felt the pinch of retraction with particular pain. The investors had just partnered to purchase Pyott-Boone Electronics (PBE), a small manufacturer in Southwest Virginia, to help grow the sales of its mining and construction safety equipment.

“Anyone from Virginia knows that 2012 was the worst year for both coal and U.S. defense,” recalled Christa Glassburn, chief operations officer for PBE Group. At the time, Glassburn estimated, the company sold 60% of its products to the U.S. coal mining industry and 40% to U.S. defense contracting. “The business went reeling in a downward direction very quickly,” she said.

Investors acted fast. PBE Group had a plan in place to acquire businesses internationally as a pathway to expansion, and there seemed no better time than this to sell beyond the U.S. In 2012, the company acquired Minecom in Australia, bringing new product knowledge for underground communication equipment back home to North Tazewell to manufacture.

It’s kept many people employed in Southwest Virginia, because most of what they manufacture now goes overseas.

It was the beginning of a major change for a company that had previously sold 98% of its products within the United States. Today that statistic is startlingly different: the company’s sales are 75% international, with sales offices in 12 countries and customers in more than 30 countries.

Tazewell, Virginia, with a population of just under 5,000, is home to several manufacturers, including PBE, Tadano Mantis Corporation, and Komatsu.

PBE Group works to stand apart in securing local employees through robust training and employee support. The company provides a competitive wage, as well as undergraduate tuition, which Glassburn sees as an advantage in attracting employees. The company also supports its primarily female manufacturing workforce with internships for the children of employees. “We support our employees while they’re supporting their families to better increase our trained workforce.”

The result is a group of 90 highly tenured manufacturing employees skilled at the delicate assembly process required to build the company’s monitoring and communications equipment. The 42,000-square-foot facility houses a small machine shop, but the focus of the manufacturing is light assembly of high-tech components, from standard environmental monitoring systems to custom-printed circuit boards. While the company’s employees are highly skilled when it comes to manufacturing, developing a global network of distributors and subsidiaries demanded an entirely new skill set. 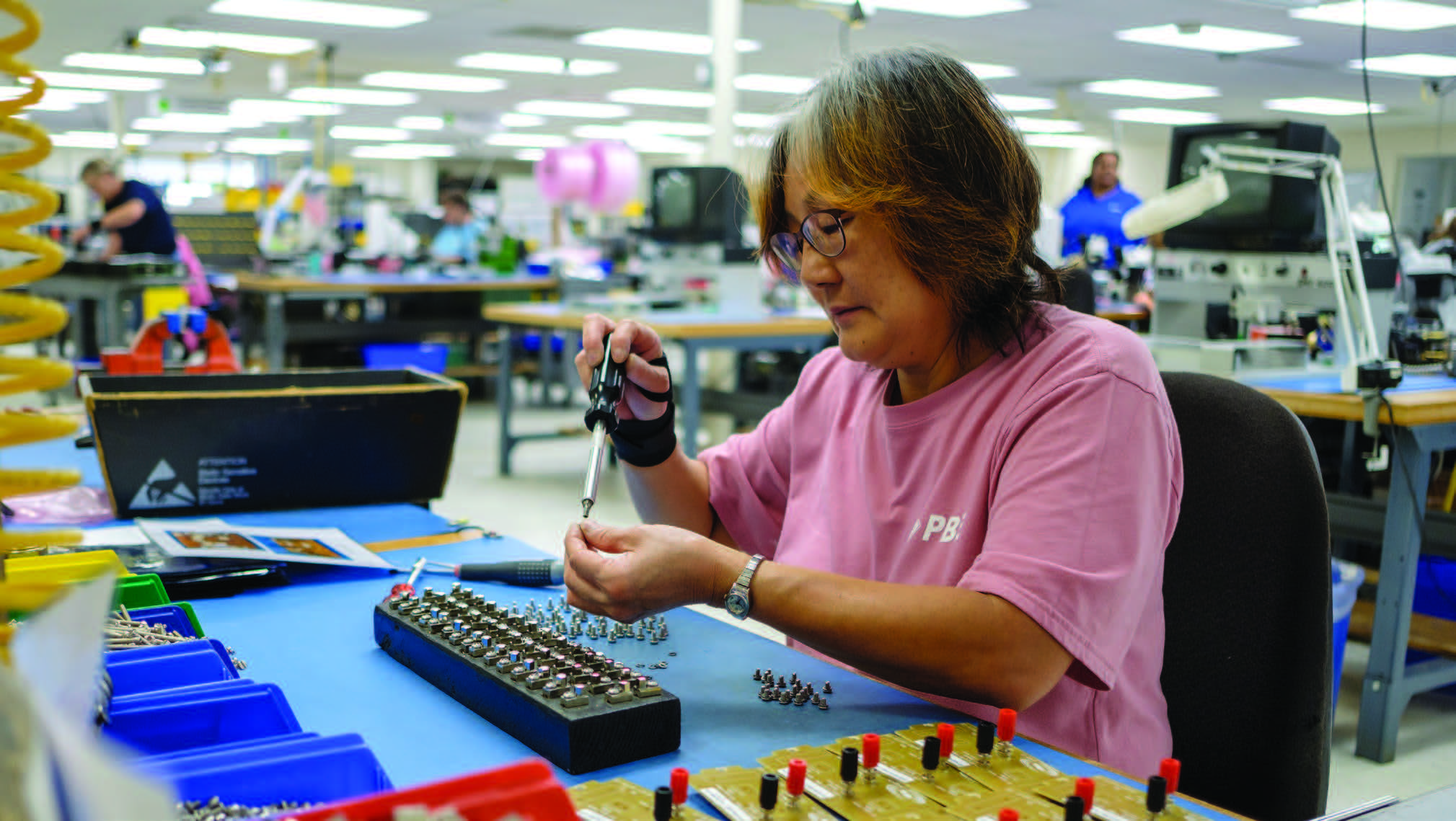 After the acquisition of Minecom, the company went into Canada and purchased Mine Radio Systems Inc., a communications equipment leader selling to more than 30 countries.  Suddenly, PBE Group had an instant network of overseas customers. With that growth came a learning curve.

“Our manufacturing workforce was skilled, and they were capable of manufacturing the products, but they had to learn how to build products for other countries,” Glassburn said. That meant adapting to subtle wiring changes and understanding the codes and associated labeling requirements of other countries.

There were also a range of administrative hurdles: selecting the containers for shipping freight to lower transportation costs; navigating duties; and creating the appropriate certificates of origin, electronic export information documents, and other paperwork that varied by destination.

“Those are the costs and difficulties people don’t explain to you when you first begin exporting,” Glassburn said. “It’s difficult to understand the real cost of exporting your product until you start doing it.”

A Hand in International Outreach

PBE found support from the state, including the Virginia Coalfield Economic Development Authority and VEDP’s collaborative Go Global with Coal and Energy Technology (GGCET) program. The company had participated in the state’s international trade programs since 2000, but this specific two-year program was designed to help Virginia coal and energy technology businesses expand internationally. Ultimately, it helped the businesses involved increase sales by 38.4% and employment by 27% through export  support services.

Among other things, the program helped PBE secure a presence at trade shows in South America and the Middle East through assistance with expensive registration fees. These events provide the networking and branding that can help small companies new to a market get their foot in the door.

Having graduated from GGCET, PBE is nearing the end of its two years within VEDP’s by-invitation Virginia Leaders in Export Trade (VALET) international business acceleration program. The program has helped PBE navigate the process of earning regulatory product approvals in new markets. With state funding support for these approvals, the company was able to speed into new markets relatively quickly.

“We might not have focused on four countries at the same time because of the large cash outlay,” Glassburn said. “With the help of the VALET program, we were able to focus on more countries and get the products approved to manufacture. It helped us to continue to develop jobs in the U.S. for international exporting.”

As the company has gained expertise in exporting, it’s now developed a global network strengthened by its latest acquisition, the January 2018 purchase of Rutherford Group in Tomago, Australia. Today the company supports 350 employees globally, and 15 facilities.

It has been an eye-opening shift for PBE’s Tazewell-based staff. They have had to adapt to being available to take Skype calls during off-hours and begun thinking about purchasing in currencies beyond the U.S. dollar.

“We’ve done a lot of training with our staff,” Glassburn said, but one simple piece of advice has proven invaluable. “Pick up the phone. When you’re all working in one small manufacturing facility, it’s easy to get up and walk down the hall.” While planning around time zones may make a phone call seem complicated, it’s crucial to getting a clear message across, she’s found.

PBE is actively looking at applying these lessons to new partners as the company prepares for future acquisitions. Glassburn calls its export business “absolutely critical” to the company’s market strength. The shift from domestic to export sales has not only helped strengthen U.S. sales, she noted, but has been pivotal in supporting the Virginia workforce.

Governor Ralph Northam presented PBE with the 2018 Commonwealth of Virginia Governor’s Award for Excellence in International Trade. The award annually recognizes a business that has increased its international sales while promoting the best interests of its employees and the surrounding community. “It’s kept many people employed in Southwest Virginia, because most of what they manufacture now goes overseas,” Glassburn said. “Exporting has really saved our Virginia operations.”

TMEIC Gets a Lift in International Sales from VEDP Trade Services

TMEIC has utilized VEDP trade services since VEDP first offered to hold in-house trade compliance training sessions for the company starting in 2003. TMEIC is now participating in the VALET program for the second time. The company hopes to sell its automation and drives technology to ports around the world, focusing on Southeast Asia and Indonesia, Thailand, and Vietnam in particular.

Stride’s international business had been based on informal relationships with in-country representatives rather than a strategic plan. During the trade mission to India in February 2020, Stride representatives met with 16 prospective partners and clients in Bangalore, Delhi, and Mumbai, with VEDP arranging the logistics of the trip and assisting with post-trip follow-up.

As a start-up with an innovative technology based on the globally popular HubSpot and Marketo marketing platforms, Seventh Sense needed to develop a global market strategy. The challenge: the company did not have any partnerships with internationally based marketing agencies, which is a major driver for the type of software Seventh Sense sells